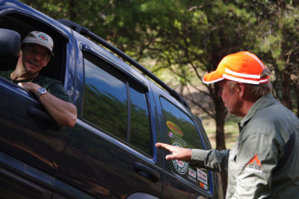 Scott Fields is well-known throughout central North Carolina as a go-to guy for just about anything 'URE'. A Charter Member of the United Four Wheel Drive Association and a Forest Service volunteer for over 25 years, Scott was instrumental in getting 4x4 access trails at Uwharrie National Forest. He has not only acted as a liaison between the USFS, 4x4 clubs, and ATV clubs, but he helped in the design of the OHV Trail Systems at Uwharrie and Tellico. 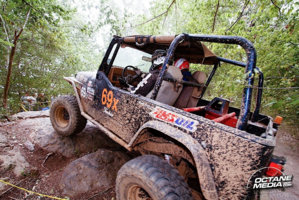 When the subject of this weekend's ECORS season opener at the Flats came up Brad Carrier said, "we are 100% on and ready to kick ass." He admits he may not be the poster child for sponsorship but, on the track, he always drives the wheels off his rig.

Actually, since the inaugural ECORS race in October 2009, he's shown at least one XJ to its demise. He ran most of the Vale race in June, 2010, without brakes. 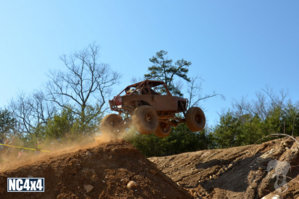 After finishing out 2011 by winning the ECORS finale at Windrock, Shawn Fisher is getting back to his roots. Applying his midwestern work ethic and explosive driving style to the 2012 season, he's taking aim at the best dirt tracks and rock obstacles the east coast and midwest have to offer. His sights are set on the 2013 King of the Hammers and, if things go according to plan, his competitors are in the rear view. Continue reading...
Continue Reading...
4x Focus... on Sean Rose
6 2,660 by NC4x4 : Jan 28, 2012 at 2:11 PM 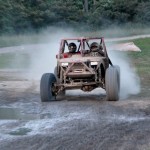 Sean Rose qualified for the 2011 Griffin King of the Hammers at the ECORS Harlan Qualifier in August, 2010, on a shredded right front tire. His 914 buggy arrived in Johnson Valley last February with a bang when the transmission blew up while backing off the trailer. Sean had been Shawn Fisher's co-driver at the 2010 KOH and was determined not to lose his chance to make a dream into reality: to drive in the epic race and take his shot at a chance to raise the sceptre as King of the Hammers. He and his dedicated crew put it all back together during the week on the lake bed but he rolled going up Outer Limits on his second lap.

The 2012 Griffin King of the Hammers is in two weeks! Stay tuned for stories on some of our friends heading out to compete for the crown and for the new EveryMan trophy! Hammertown opens in just a little more than a week!

The Tarheel Sports Car Club 2012 RallyCross schedule is up and the first event will be March 11, in Wilson, NC. Even cars (that don't mind getting dirty) are encouraged to come out and have a blast!
...

The ECORS 2012 season opener will take place at The Flats in Marion, NC, on March 17. Harlan County Rescue Squad will host an April Fools Run at Black Mountain Off-Road Park in Evarts, Kentucky, the weekend of March 30 - April 1, 2012. They've added a zipline to the park and they are working on adding paintball courses, as well.

The trails at Uwharrie National Forest open for 2012 at 10am on Friday, March 30!

2012 Jeep Beach registration is now open. This annual event of Jeep enthusiasts celebrating a passion for off-road vehicles will be held in Daytona Beach, FL, April 25 - 29.

The second 2012 ECORS race will take place on May 19, at The Great American Park in Auburn, AL. ECORS has announced that race #3 will be July 7, at Durhamtown Plantation in Union Point, GA. With this event, there will also be many other happenings July 4 week and weekend at Durhamtown!!! MX, ATV, SxS, and 4x4 events all week and weekend to keep everyone entertained! ECORS will only be using a small section of the 4x4 trails, so bring your rig to the race and enjoy some of the other trails at the complex!

The 2012 Griffin King of the Hammers is fast approaching! Hammertown opens in just a little more than two weeks! photo credit to Will Wissman Stéphane Peterhansel won the Dakar 2012 over the past weekend. During the 46-year-old Frenchman's off-road career he has won the race an impressive 19 times, in various classes, since his debut in 1991. This year he won 3 of the 14 stages and, thanks to no major reported problems, finished the 5205 brutal miles from Argentina to Peru almost 42 minutes faster than second-place finisher Nani Roma from Spain. There was quite a bit of drama played out over the course of the last 5 or so stages, after Robby Gordon was accused of using his tire inflation system to boost his motor's performance and many thought Peterhansel should have been reprimanded and penalized for clipping an Italian motorbike racer on the course. Robby maintained his innocence and cited the fact that the tech inspectors passed his vehicle. Gordon even went so far as to plug the system and won Stage 12 to prove it did not affect performance. Robby also won three of the 14 stages and finished fifth overall with a time of +02:16:53. He came as close as second place over the course of the race, but had several poor days with various mechanical problems, something he knew would weaken his chances at his first Dakar win.